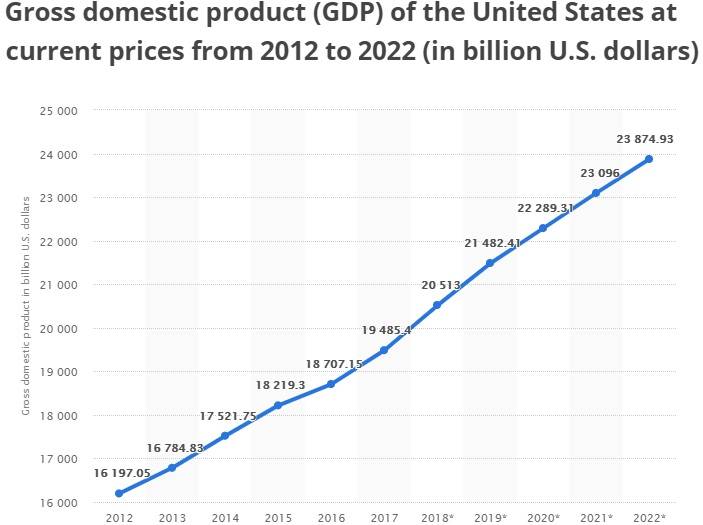 Economic reports for the first half of 2019 show National unemployment holding at 3.6%, near its lowest in half a century and wages are up 3.1% over last year. Real GDP rose an impressive 3.2%. The S&P and the Dow Jones are heading for record territory painting a very bright future. Growth in infrastructure, intellectual property and equipment were up 2.7% but retail sales increased just 1.2%. While individual savings rates are up.

The United States of America moves its way forward as the President paves the way for US companies to grow, and place barriers for unfair foreign manufacturers. Both China and Mexico have expressed reluctance to continue trying to wear down President Trump yet it is highly unlikely they will cooperate fully with the US requests for fair trade.

China’s rapidly receding economy and plunging exports are two trends to watch from our biggest economic competitor. How Mexico will help ease our Southern border crisis will also show how well our Southern neighbor wants to cooperate and protect its favored USA supplier position.

The best news is the Fed’s expectation of interest rate cuts which the stock markets loved at the end of this quarter. Democrat’s claims of big inflation and crashed retail sales have not materialized. The economy keeps rolling forward, making the Economic forecast for 2020 and the chances for reelection favor the President.

It’s more and more obvious now that the US increasingly doesn’t need Chinese imports and the tariffs are working. US stock markets are booming and the outlook is strong. GDP rose 3.2%, far above economists’ expectations, and pushed the stock markets to new highs. The gains were attributed to growing exports, reduced imports, higher job numbers, and lower government spending.

Here are the detailed breakdown of the major numbers:

For homebuyers Realtors, land developers, and stock market investors, the unexpected 1st half bonanza could indicate where the economy is going this summer fall, and in 2020.

What was supposed to be a strong decline in economic activity, jobs, manufacturing, and investment, the winter of 2018/2019 as reported in the mainstream media wasn’t all that bad. That means we have solid footing for a great 2nd half of 2020.

The USMCA trade deal will benefit the US economy going forward. The transition to an America First economic policy was forecasted to slow US GDP, but the worst may be over. That doesn’t mean the threat of a recession has disappeared.

Small businesses across the country make up 99% of all U.S. employers and 64% of net new private-sector jobs, they truly are the backbone of the country’s economy and an aggregate indicator of its health and status, and their output is growing at near 4% rate.

The US was on a record run until the mid term elections and rising interest rates dampened the party.  Even with the reduction of economic stimulus and the turmoil over protective tariffs, the economic predictions are good. If this unexpected strength continues to the 2020 fall elections, it could determine the outcome of the Presidential elections.

That might mean stabilization and the continuation of growing US manufacturing production and services exports. China’s economy is stabilizing which eases dire global economic predictions. Latent demand for goods in the US remains high, and when tariffs and US manufacturing grows, Americans will buy more US made products.

US GDP is expected to grow strong through 2020. Optimism in business is high. The Wells Fargo Small Business Index hit a record high at +136, the highest in its 15 year history. The only thing bothering business these days is fewer talent available.

With the intent to bring manufacturing back to the US, which hasn’t really begun, he US is seated strong for years to come. The next 2 years of US manufacturing development through 2020 will strengthen American competitiveness for decades. The US dollar will strengthen, stock markets will adjust, and it’s fun time ahead for Americans.

The lagging housing market and small business sector should regain their stride once multinationals are forced to build factories in the US (Jan 1st, the 25% import tariff took effect. No free access for China is expected). The coming 10% tax break for the middle class makes 2019 look very good. Multinational corporate stock market performance may see some further corrections as imports from cheap labor pools into the US dwindle.

The U.S. economy expanded at a 2.8% annualized rate in the first quarter and 3.2% in the second quarter based on data that showed domestic retail sales grew at their strongest pace in 1-1/2 years in March.  The good news will improve the housing market forecast.

What this report translates to for 2020 and beyond, is stronger employment security, prime market access for US companies, better housing, and more opportunities for young people with big student loans, returning entrepreneurial spirit, higher wages, and hope for a better nation for many years ahead. Wage growth is improving as companies return from overseas, and zero tariffs to an economy bursting with potential.

If the current economic strategy doesn’t work, the US can always change course and ease its trade rules. It’s a no lose situation for the US economy. And so far, multinational corporate profits haven’t been affected. In fact, with small business America decimated, these companies have no competition and are thus reaping ridiculous profits.

The US economic prediction is that the US is about to enjoy the same growth and opportunity that spawned the China revolution. High employment, new career opportunities, optimism, imagination, confidence, and hopefully soon, higher wages as newly created US firms begin to thrive and capitalize on a wealthy American consumer market.

New business formation was at its lowest in history when Trump was voted in. Since then it has risen, and with rising tariffs, lower regulation, and continuing low interest rates, the stage is set for an entrepreneurial boom in the US.

Continuous biased reports in the mainstream media say stimulus withdrawal and waning consumer confidence will end it all. Yet stats show strong consumer confidence and evidence that consumers are ignoring politically biased noise in the media. Financial experts on Bloomberg were hinting at another potential 10 years of boom times in the US.

Good news for the US economy. With manufacturing returning, US Oil production growing, low corporate taxes continuing, business regulation dismantled, the macroeconomics for the United States is as good as it has ever been. Oil production, manufacturing, housing, construction, and technology startups in the US haven’t even hit their stride yet. And while economic turbulence has caused discomfort, Americans should continue to enjoy years of strong growth and prosperity and to solve the affordable housing challenges and avoid any housing price crashes in certain overpriced cities.

The media have tried to talk down the new US economic revolution, but they’re growing weak against a clear voice of confidence in America. If China can sustain 5-6 % growth, the US can manage 3% to 4% growth just fine. There’s lots of room for improvement with no overheating possible. An endless array of economists, billionaires, millionaires, stock experts, and democrats are promising a big US economic recession within a couple of years. They cite stimulus statistics, global trade numbers, business cycle history, tradition, and trade impasses that will cause a recessions. In lieu of real economic performance statistics, consumers and voters are ignoring the dour outlook.

The US economy looks unusually solid, not a bear or a bull, but more like a Rhinoceros. While some bellicose doomsday Sayers tout their complaints, they themselves keep pulling in higher profits from their US Stock Portfolios. Laughably ridiculous. There are some exciting new statistics from housing to manufacturing to new business formation that bolsters a happy sustained outlook. US manufacturing jobs were decimated as we all know, and as these jobs in modern manufacturing return, the economy will boom and wages will rise.

Consumers are not fulfilled and production capacity will grow. The talk of embargos on US goods are overstated for sure. Resentment from Europe, Japan, Canada, and Mexico will subside. US manufacturing output will grow in quality and the world will want US products. Who wouldn’t want reciprocal access to the US market?

American consumers are expecting good things. They’ll buy any house they can get their hands on and they won’t be buying as many Toyotas, Mercedes Benz and Beamers as before. Fords, Chevys will be in good demand. Trading economics forecasted 93.to 95 consumer confidence rating for fall 2019.It’s actually over 100 despite all the political and trade volatility.

The end of Free Trade was predictable. American poverty, debt, and misery and lack of control has brought it to a stop. Fair Trade will be the new norm. Free Trade wreaked havoc on American lifestyle, wealth, politics, and optimism. It was a concept for the 80’s, but it’s not the 80’s anymore. It has ruined people’s lives. The stock markets continue their happy upward direction.

A US housing crash is unlikely and the stock market looks pretty healthy. However, a global recession would affect the US as would a China collapse. President Trump knows it, which is why he keeps pulling back on 100% commitment to many of the policies he sets forth. Housing starts keep growing as depicted below, and with demographics so positive (Millennials and Gen Z’s coming soon), the demand will be steep. It’s a fantastic time to be in US real estate.

It’s this matter of self-esteem of the American people that’s so critical. CNN and other media paparazzi think esteem is something dished out in scathing news reports. But what’s happening is a nation’s self-esteem is being regained and this time inoculated against media manipulation (the Media and big advertisers don’t like that).

A first thought many of us have is that the US economy is too strong to stop – a new economic locomotive with momentum. It’s partly powered by the relief of decades of economic evil and by the old belief (baby boomers) that the US should be strong and independent. Some have felt Asia should lead the world. There’s something extremely unpatriotic about that. Even if Trump disappears, the America first agenda will continue. The people will ensure it happens. There’s no going back to the poverty, debt and hopelessness, particularly for the forgotten in the rust belt and Midwest. Certainly, President Trump could communicate the benefits of the America First strategy better. For startup entrepreneurs, for new investors, and for consumers, the US economy is delivering. It will take a while for Americans to regain their emotional health just as they lost it in the last 30 years via Free Trade. Americans are picking up the value of Trump’s agenda slowly though with their new higher paying jobs and new homes. It might be called osmosis and it will grow. Yes, cars, solar panels, smartphone apps, robots, and computer chips can be made in the USA by companies managed by US executives (sorry India). There is real hope for the future of young Americans.